An Ironman World Champion Reports On His Experience With CVAC Pods 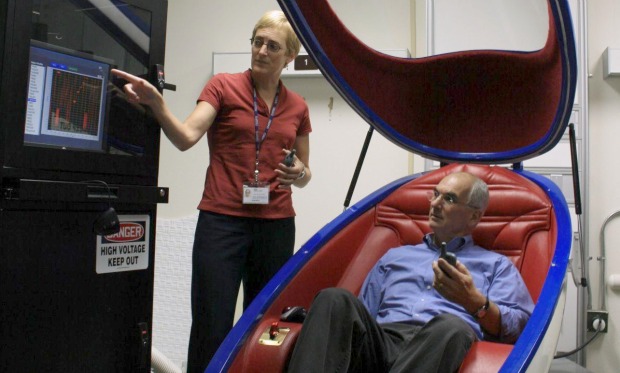 Every few years I test my ever-evolving training theories on myself in preparation for my favorite event, El Tour de Tucson. Power, endurance, and recovery are the cornerstones of any athlete’s preparation, but the subtleties of how these basics are played out makes the difference between being competitive and just being pack meat.

At the 2010 El Tour on November 20, I finished 22nd overall—at age 63. Results like this don’t just happen; they happen with cutting-edge preparation.

To hit my peak, I considered combining altitude acclimatization with my regular schedule of training rides and strength sessions. As any altitude acclimatization junkie can tell you, the benefits include increased oxygen transport from the lungs to the bloodstream, an increased ability of the blood to carry oxygen, and an increased ability to unload oxygen from the blood. Sleeping in a chamber or stuffy tent, however, holds no appeal for me, and so I turned to the CVAC (Cyclic Variations in Altitude Conditioning). The results I got made me wonder, “is altitude training, per se, obsolete?”

Those who adapt the fastest will generally get to the finish line first.

The CVAC process has more to offer athletes than altitude acclimatization alone because it’s more about adaptation. CVAC sessions evoke the body’s natural adaptation response—its ability and desire to adapt. But what does such adaptation have to do with athletic performance?

First of all, adaptation is the common thread linking interval, circuit, and strength training. When muscles recover after the stress of a heavy load, they react by adapting. Frequent adaptations refine the body as it becomes increasingly able to cope with harder efforts, more wattage, and heavier loads. A CVAC uses dynamically cycled changes in pressure, temperature, and air to provide the body with multiple chances to adapt. The environment provided by the CVAC process employs very short-duration exposures to hypoxia (contrary to other methods that use nitrogen titration, thus providing a constant hypoxic environment). The changes in pressure represent a very important part of the CVAC process, as they set up waves of tension and relaxation. This is important to us endurance athletes who must respond to sustained bouts of tension and resolution like hill climbs, attacks, or time trials. The faster you can resolve, the faster you’re going to be. Competitive success comes from the ability to adapt, and those who adapt the fastest will generally get to the finish line first.

Photo courtesy of the Stanford Center on Longevity

CVAC is also incredibly time efficient. When using nitrogen titration systems you can spend well over 50 hours per week; the weekly commitment for altitude adaptation is considerably compressed by a CVAC session. To prepare for the El Tour, I did 18 CVAC sessions over a three-week period. Each double CVAC session lasted 40 minutes, which I did three times each week. The two hours a week I spent in the pod were relaxing and revitalizing.

I recall the flight of my life in an FA18 Hornet each time I climb into the pod—the lid reminds me of the jet’s canopy—and I can practically see my surroundings. Others may choose to use the time catching up on sleep or phone calls.

Triathletes and cyclists who complete regular sessions report great improvement in power and endurance; I found improvements in time trials, and I have a gut feeling that I increased my VO2 Max. Other athletes who use CVAC in their training report similar experiences; the benefits we’re noticing are consistent with the findings of independent researchers. Many athletes who’ve used CVAC have also reported better recovery. The general consensus is that we are able to train longer and harder when we incorporate the CVAC sessions into our training. Improvements in muscle efficiency, muscle buffering, and the ability to tolerate lactic acid production are likely behind this, and I think this all could help ward against over training.

Although I was injury-free during my training, others have told me that they were sure their recovery was significantly accelerated by CVAC sessions. The bottom line is, CVAC sessions improve the efficiency of your workout—no matter what sport-specific applications you employ.

I finished in the top 25 in a major Pro-Am event with over 8,000 riders and over 100 professional and Cat 1 riders. After the race I felt relaxed and strong—the way I used to feel in stage races 30 years ago. This all may seem anecdotal, but my experience checks out with a 2009 study published in Wilderness and Environmental Medicine showing the CVAC process to improve the capacity of study subjects’ blood to carry oxygen. I’m not a scientist, but this data shows that this method of altitude acclimatization can provide the power and endurance many successful endurance athletes enjoy.*

I urge you to put the polish on your performance by adding these sessions to your regular training regimen. For a listing of commercial sites offering CVAC sessions, visit www.cvacsystems.com/index.php/locations.
*Editor’s note: A doctor at the Stanford Center on Longevity is currently preparing a study on this method for publication.

John Howard holds world records at both ends of the spectrum of madness: In speed (152 mph) and endurance (539 miles in 24 hours). He is an 18-time elite and masters USA cycling national champion, an Ironman world champion, a professional coach, bicycle fitter (he created the FiTTE System), and author of the new book, Mastering Cycling.